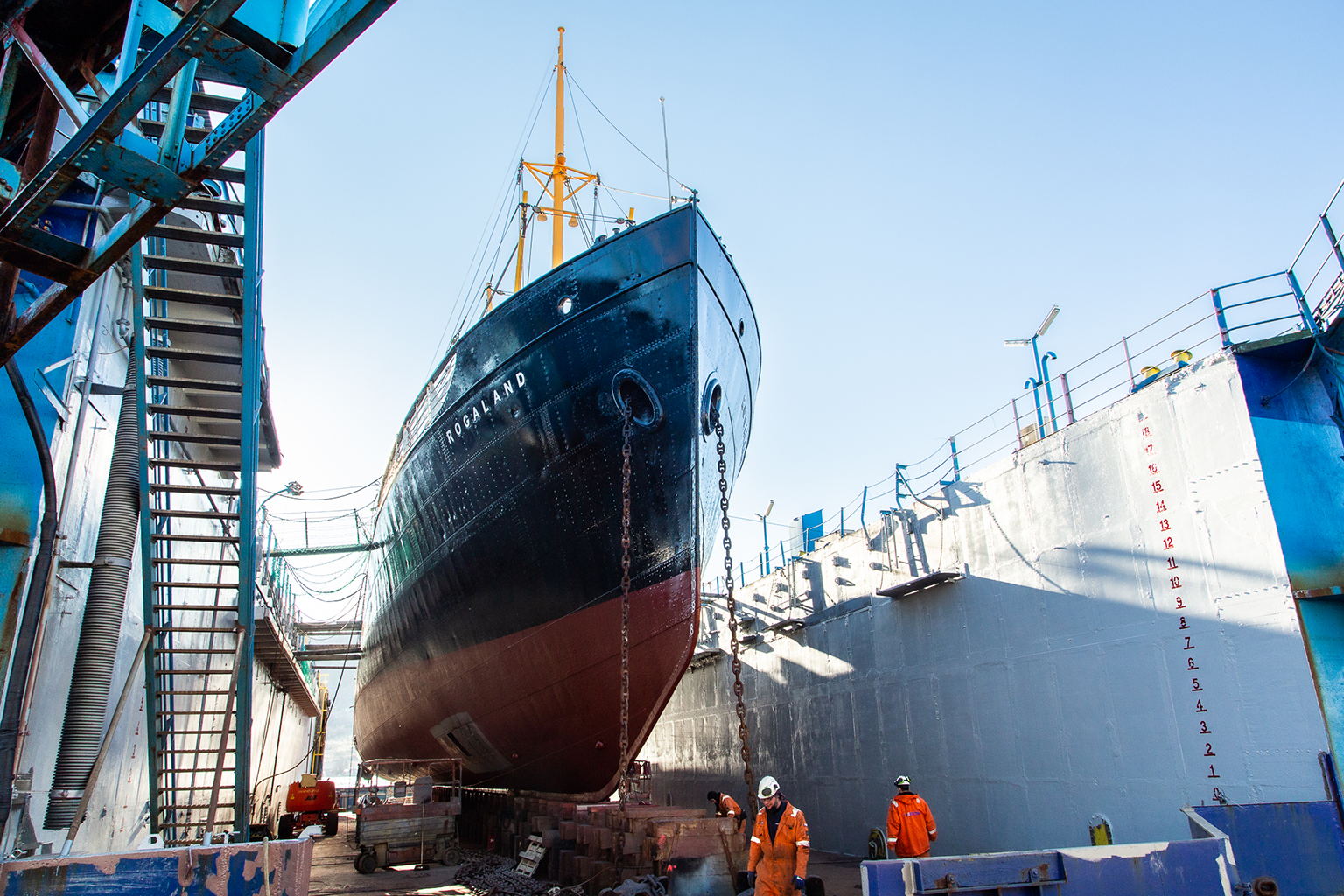 It's not always electrification and hydrogen going on at Westcon Yards; recently the veteran ships M/S Rogaland and M/S Sunnhordland completed their classification at Westcon's yard in Ølensvåg.

M/S Rogaland was built in 1929 and is one of the few ships in Norway that are officially protected. She has recently completed her five-year classification at Westcon's yard in Ølensvåg, and is now ready for new adventures.

M/S Sunnhordland started out as a submarine chaser and escort ship for the US Navy in Chicago, in 1943. She has also completed her classification in Ølensvåg. The ship is an old aquaintance of the shipyard, as she's been in for service and repairs many times before.

M/S Rogaland - one of 14 protected ships in Norway

Lasse Heggen Åsbø, the Project manager for M/S Rogaland during her stay in Ølensvåg, says there's something special about working with such an old ship.

-It's always fun to have these ships for a visit. The crew is nice and they have a genuine interest in the ship's history, and they want to pass this on. We always feel welcome in the salon during the morning meetings.

The foundation Veteranskibet Rogaland has owned the ship since 2002, and in 2014 she was officially protected by the National Heritage Board. In 2015 it was assigned as Stavanger's official city ship.

M/S Rogaland was originally built as a steamship by the Stavanger Støberi & Dok for the Stavangerske Dampskibsselskab (DSD). Until the war, 'Rogaland' sailed weekly trips in the Coastal route between Sandnes/Stavanger and Oslo.

After dramatic years in the war, and a subsequent condemnation of the ship, it was rebuilt and in 1947 assigned the coastal routes between Oslo and Bergen. It was later sold to Nika AS in Sandefjord, Norway, as a sandblasting vessel.

Today the ship is used for private and regular events during her summer season. Local history organizations also use 'Rogaland' frequently for their trips. Einar Haualand is the Board Director for the Foundation Veteranskibet Rogaland, and he says there's a lot to think about when maintaining an old ship like this one.

- There are a few things we need to take into consideration; we want to keep as much of the original ship as we can. Sometimes we have to hire people with a special skillset to do so.

During her two-week stay at Westcon Yards, she has undergone overhaul of valves, axle drive, various inspections and controls of main engines and secondary engines, as well as thickness measurement of the hull and structure. She is also newly cleaned and painted. Because of the ship's age, some of the steel needed to be replaced.

- It's a bit different working on veteran ships; access to parts is often difficult or impossible, because most of the equipment and systems on board don't exist or aren't produced anymore. In those cases it's good to have skilled workers who can find good solutions to the problem.

This is the second time 'Rogaland' is in for service and repairs at Westcon Yard's shipyard in Ølensvåg. Last time was ten years ago.

Haualand explains that previous experiences with Westcon had a great impact on the choice of yard for this stay.

- Obviously there are tender rounds, but all in all we found that Westcon Yards was a good fit. We have people here who have had great experiences with Westcon before. We know what they represent.

- It's exciting to see how ships were made before, and you can really see how it has developed. The history of the ship is really interesting as well.

And he's not alone.

- My impression is that the foremen and workers all think it's exciting to work on these ships.

Project Manager for M/S Sunnhordland, Svein Syslak, agrees with Åsbø. He's impressed by the crew who keep the ship running.

- Of course it's special when these ships come in. I'm truly impressed by the crew who are able to preserve the ship and her history alive.

The veteran ship, which is originally from Chicago, has completed her five-year classification at Westcon Yards, which includes cleaning and painting, thickness measurements, inspection of bottom valves, replacing steel, controls of anchor chains and controls of axle and rudder clearances. Her stay lasted for about three weeks.

- We know the ship well, and we have a great relationship with the crew on board, says Syslak.

Because this isn't 'Sunnhordland''s first visit to Ølensvåg. She has visited three times before, for service and repairs.

Machine and Technical Operations Manager for M/S Sunnhordland, Asgeir Andersen, says both the crew and the management are very pleased with Westcon's work.

- It has a lot to do with capacity, but we have established a good relationship with Westcon Yards and we're happy with the communication we have with them. They are clean and professional, and good at what they do.

Andersen can confirm that it's sometimes challenging to work with such an old ship.

- There are many hidden dangers with old ships like this one. It's good to have competent people who already know the ship, and have experience with working on her.

M/S Sunnhordland originally sailed as a submarine chaser during WW2 and was stationed at Gibraltar for the British Royal Navy.

During the rebuilding years in Norway after WW2, the ship became an important means of transportation for local routes along the Norwegian coast, and south towards Denmark. She sailed fixed routes for 24 years, before she in 1974 was sold to Oy Fager Lines and rebuilt as a cruise ship by Wärtsila. Later, she sailed the Gulf of Finland, between Helsingfors, Leningrad and Tallinn.

In 2015 the ship was restored and brought back home by a group of ship enthusiasts from Stord, Norway. She then got her HSD-rosette and the name M/S Sunnhordland back.

Today she sails for private and public events, both at sea as well as by the bay. In 2021 the ship was among other things used for four different school trips, and this May there will be a cider trip arranged for everyone who wants to join.

Andersen explains that even though it's paid work, most of the crew have a genuine interest in the ship and her history.

- Most of us have a genuine wish to preserve the ship and her history. The trips are also a lot of fun, so that helps too.

With trips already planned for both ships, there's no doubt there will be a lot of fun - with a hint of good, old Norwegian history - when the ships start their summer season of 2022 - with good help from Westcon Yards.