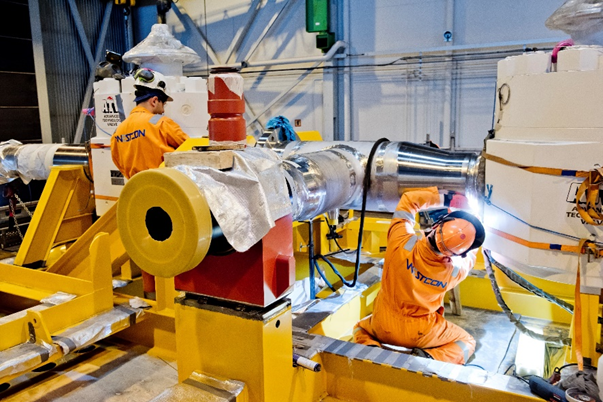 Westcon will deliver 13 structures and 6 PLR’s to TechnipFMC. TechnipFMC has a SURF contract with Equinor for the Breidablikk oil field and the structures will be delivered in February and April 2022. – This is an important contract in our commitment to more demanding subsea deliveries, explains Subsea Manager, Steinar Matre.

TFMC is one of the department’s most important customers and Westcon Yards Subsea has a long-standing relationship with the subsea giant.

- Through different projects over the past seven years we have developed a clear understanding of what it means to really deliver in demanding projects that have strict quality requirements, says Site Manager at Subsea Florø, Ole Anders Smørdal.

The structures will connect the pipe system which TFMC will install on the ocean floor in Equinor’s Breidablikk oil field.

- The Breidablikk field is one of the largest oil fields on the Norwegian continental shelf that still hasn’t been developed. The decision to expand the field will give significant value to the Norwegian community and its owners. Today we are also happy to announce that we will award two central contracts with a total value of 3,3 billion NOK. These contracts will contribute in creating important activity for the supplier industry and secure many new jobs for the future, says Geir Tungesvik, acting Executive Vice President for Technology at Equinor in a press release published on the company’s website.

Besides the structural work, the contract includes welding qualification, installations, welding and testing of valves and pipe systems.

- This is the most comprehensive contract when it comes to amount of structures and complexity in Westcon Subsea’s history, Smørdal points out.

- This also means that we can further develop our knowledge and expertise in the technical department within this subject area. We now have the opportunity to phase in and acquire new resources for this kind of competence at the yard, he explains.

This contract is essential for Subsea Fabrication and the department is currently working towards upgrading their facilities in Florø, specifically for this kind of fabrication work. Smørdal describes being awarded this contract as a big declaration of confidence from TechnipFMC.

- This is primarily a big declaration of confidence from TFMC. We have many competitors both nationally and overseas who would probably go very far in securing a contract of this size. I believe our ability to deliver quality and predictability in previous collaborations has been significant in choosing Westcon.

In a statement released by the company, TechnipFMC explains that both previous collaborations with Westcon and a desire to further develop their partnership played a big role when they awarded the contract;

- By awarding this contract to Westcon Yards, TechnipFMC is showing that Westcon Yards is a reliable partner in fabrication and testing of SURF-structures. This also lets us strengthen and further develop existing competence within Westcon as a supplier, and further develop the existing partnership between the two companies. Westcon has, over many years, proven that they deliver quality and predictability which is crucial in the planning of our operations and installations offshore.

Subsea Manager, Steinar Matre, underlines the importance of all new contracts in the development of the department, but that contracts of this size and complexity really pushes the department further;

- This strengthens Westcon’s commitment to acquiring more demanding subsea deliveries. Over the years we have developed a strong team and we are also investing in upgraded facilities and equipment for just this kind of work.